Austin Paz is a BADASS! Can you argue with that? I guess you could, but then again you are probably the same person who would argue that your shit doesn’t stink just for the sake of “ARGUMENT.” Austin is one of the few BLADERS that can not only lace the best tricks, but can also take the top notch photos of other BLADERS lacing tricks as well. Brandon Smith & Jeff Sockwell are a few others that I would categorize as being part of this elite crew. PROPS for skill, style, & ambition goes out to Austin. This spot is something I have been holding on to for months now. Everyday I would walk past it, day after day, trying to think of the perfect person to handle it. This day in particular started at the Battery Park high ledge. As Austin was warming up I realized he was doing topsouls both ways on this ledge in his sleep. So, I decided that he was the perfect candidate to rid my brain of this spot. A few hours later we rolled up on the spot. The “BUMP” was slightly less than I remembered, due the fact that when you dream of getting a picture at a spot your brain sometimes tends to embellish to facts. Whoops! None the less Austin began to hammer away a few tries while I set up for the pic. Ten minutes later… END OF STORY! I’m sure you will be seeing more from him throughout the pages of skatelife.TV in the very near future. 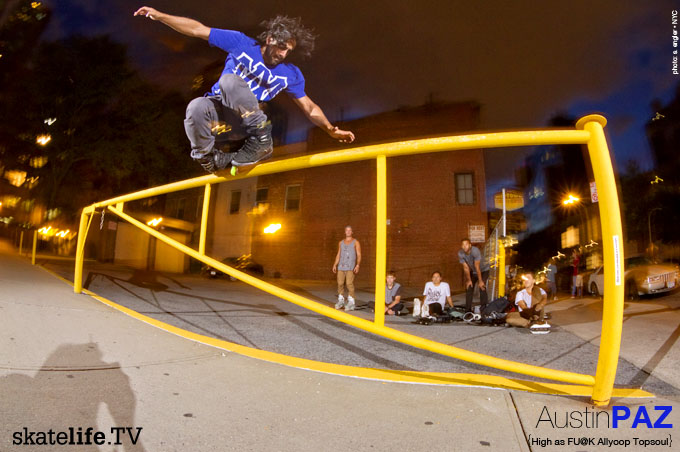