Sunny blue skies with white clouds racing in air, seven cars find parking next to each other in the empty lot at the warehouse that has an epic down ledge.  Three of the seven cars have individual drivers, each one just meeting up after prior engagements; work or family functions, but we’re lucky enough to have Jeremy, to keep everyone informed on where to meet.  Three more cars half way filled with BLADERS are all ready to shred the obstacle at hand. The last car has two people squeeze past the girlfriend in shotgun who has to recline her seat to release them.  She will be relaxing comfortably, while the boys go out and play.

As everyone settles in, BLADERS strap up, camera men get their gear together and look for the perfect magazine shot.  Other people from the group pull out a power screwdriver, unscrew the hand-rail that makes the down-ledge a lot more dangerous than fun, pop it out, holes patched, and any evidence is hidden.  Similar to James Bond stealthily coming from behind snapping the neck of a “goon” and hiding the person’s remains in the bush, everything occurring in one motion.

The session includes photos by Jon Labez, a second camera angle from Erick Rodriguez of a Backside Fast slide cross grab by Chris Calkins, Blindside top-acids by Geoff Leyva, Fishbones by Chuck Cauton, a back-side cross grab backslide by Soderburg himself.  After his trick, crazy spider landing included, he will pick the camera up and make sure everyone’s tricks were filmed and documented for his upcoming movie, “Take Your Time.”

Night falls on the session, the blades come off, and the hardest part of the day is here, when we have to say goodbye to the Saturday club.  We all look forward to next weekend, when we all get to escape into another BLADE adventure.  Jeremy will be the one to call since he is ready to shred anytime, any place, and will gladly let you know where the session’s at.  As many people that have came and gone in Rollerblading, it is a pleasure to see Jeremy BLADING thirteen years later as he keeps the Los Angeles blade community alive and doing well. 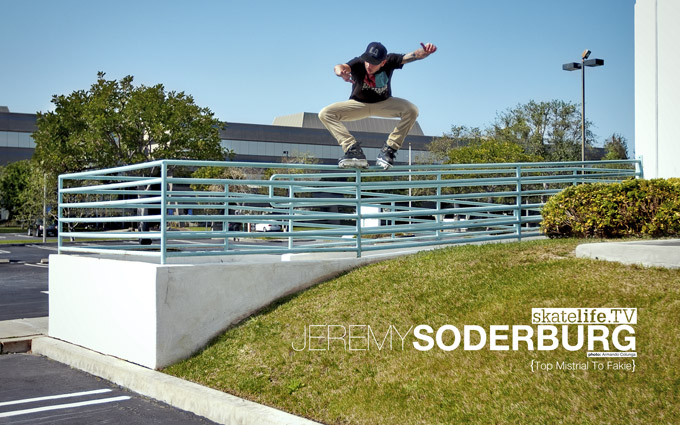