When attending a skate contest there are four rules you must always abide by if you want to survive the weekend unscathed: hide your loot, hide your goods, hide your booze and most importantly…hide your wife! If you follow these rules when the pack comes to your town, you should expect only a nasty hangover and enough shenanigans worthy of reminiscing to hold you over until the next one comes around. This year’s 3rd annual A-Town Stomp held in Atlanta, GA., was no exception to the rules, and if you broke the rules you probably got your booze consumed, your prize money and goods lifted, and your wife…well let’s just say I left mine back at home in Florida!

It’s Friday night and right on schedule the weekend’s debauchery kicked off while I was stuck in the Fort Lauderdale Airport with a 3 hour flight delay. Upon my arrival at 2 am in the “Hotlanta,” I was greeted by my great friend Trace Taylor, who was able to fill me in on the highlights that I missed from the opening ceremonies. It sounded like a typical meet and greet for the boys, as about thirty or so of them ascended on to some poor but surprisingly expecting going away party for someone’s friend of a friend. The boys did what they do best which is drink viscously and get rowdy. As you can expect, the testosterone levels were on high as feats of manhood were exchanged in the form of wrist breaking punches to each other’s arms, and eventually culminating into a Sammy Chase “trust fall” from a roof into ten or so of his closest friends. By the time I was in the know, Trace got a call that the party had been broken up by the cops and the crowd dispersed. All the same to me as I was in no mood to play catch up and was almost glad I had missed it…almost. 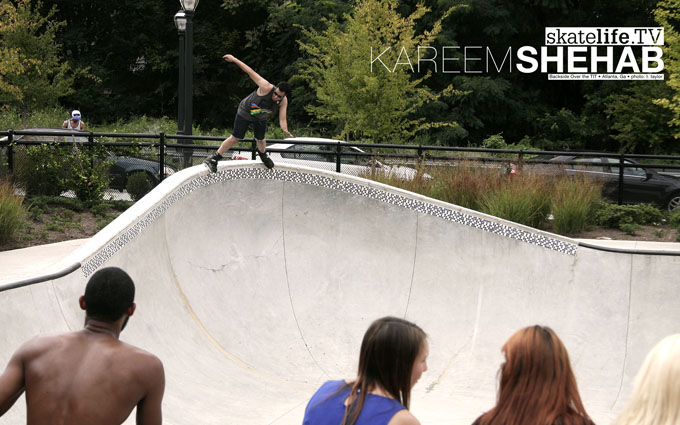 The event organizers, Carson and Brian Starnes did a great job of planning the event. One of their many great ideas was to hold the meet up until 2 pm at a local skatepark giving time for some of those hangovers to subside. What was rumored to be unwelcoming turf in the “Blader Hatingfest” city in the country, Trace and I arrived to a park over flowing with friends on their blades. The unfriendly “veggie plankers” didn’t even bother to make an appearance. We weren’t concerned either way because everyone was in reunion mode. Handshakes and pleasantries were exchanged while everyone got there warm-up shred on. After about an hour and half of this it was on to Spot #1 which was refreshingly NOT a “practice ledge”.

Under a bridge near the Georgia Dome, Spot #1 was a collection of shred-ables set on a sidewalk that divided the road and a parking lot. On the side of the walk was a bank leading into the lot making an almost perfect launch to the added street obstacles of a parking barrier, coping box, and crowd fencing. Lots of respectable tricks went down on these obstacles but really only one that is going to be remembered…David Sizemore’s hurricane top negative mistrial revert off on the rib high crowd fencing. The session at Spot #1 ended with five competitors in car tow towards the bank as they all launched in a formation that resembled something you might see at a Blue Angels Airshow.

Spot #2 upped the danger factor by relocating to the concrete stadium seating behind a Boys & Girls Club. All the spots at this year’s event were what could be considered “artificial” street because they involved obstacles that were brought in specifically for the contest. However, Spot # 2 aside from the landing boards, was the only true street spot. A handrail down the stadium seating complicated by a small two stair gap at the top which was sketchier than it sounds, accompanied by a five stair gap at the end onto the landing boards. As the competitors began to become accustomed to the rail with some warm up tricks it started to rain. Some competitors ran for cover while others continued to battle it out and the organizers attempted to keep the landing dry by tent cover. Lots of competitors got dealt with at this spot as the rain came down and it’s rumored that Thomas Martin broke his spine?! 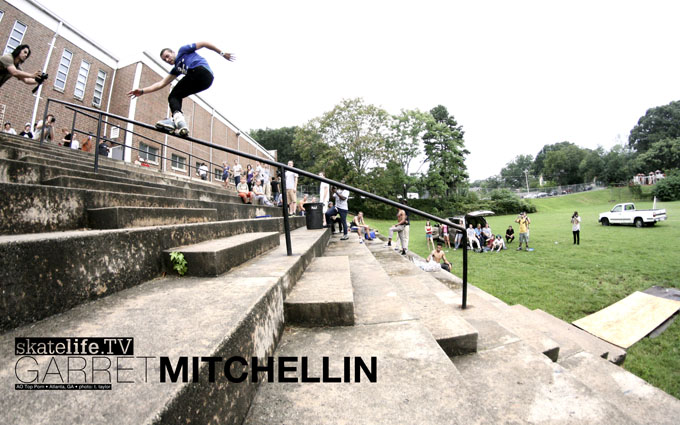 It eventually stopped raining and the session continued. Just to give an idea of how intimidating this rail was, I can only recall one alley-oop trick landed; Mikey Harper’s alley-oop unity at blazing speed. Some of the other highlights included Sizemore’s x-grind 360 off, Jon Cooley’s Topsoul 540 off, Garret Mitchellin’s 360 soul, and the best trick of the day, winning him a hefty $000 that went “missing” by the next day, Phil Gripper’s back backslide to top soul to fakie off (See rule #1).

Due to the rain delay, dusk slowly crept in for what looked to be a moonlit final spot. As we iPhone navigated to Spot #3 we got deeper and deeper in to what looked to be a rough part of town. However rough this part of town appeared, it didn’t matter as 150 or so of us took to a multi-level concrete slab that the Starnes paid $50 to the “lot manager” for us to shred uninterrupted. Also thanks to the Starnes forward thinking a convenient store was right next door. Seeking a cold beer to accompany me as I watched the finals, I stopped in. Unfortunately, the wall refrigerators were far from cold leaving only one freezer full of cold malt liquor. I opted for one luke warm Heineken to hold me over until I could find some refreshments meeting up to my temperature standards (holding tight in the back of my mind rumors that the after party was going to have two ice cold kegs). 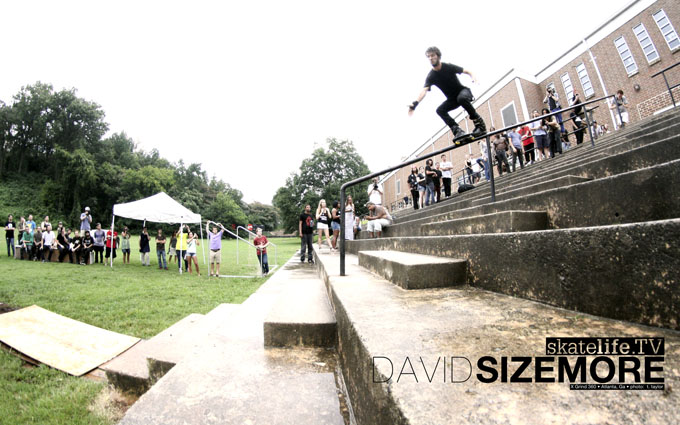 Waiting in line to pay for my beer, and as the local ahead of me in line scratched off his last lotto ticket, I was in anticipation of what obstacles were presented for the final spot. Strolling out the store I turn the corner, I am welcomed by the final competitors hocking themselves at a multitude of unorthodox obstacles. The two layer slab had begun to erode at the second level creating slabs of concrete to falter in several different shaped banks down to the first level. Holding theme with the artificial street obstacles, the Starnes brought in a short grind box to drop, gap to down box, pole jam to gap off, and the gnarliest launch ramp to pole jam gap I’ve ever witnessed. The final competitors left standing threw down hard on the final spot as the night set in. Pole jam, after pole jam was thrown. Tim Taylor’s zero fish zero, backside 450 out, Sizmore’s, Cooley’s, Bazydaldo’s… The airs from the same ramp, Sizemore switch 7, cooly’s misty’s, Bah back flip, Tim’s everything. That’s just the massive pole jam too; the final competitors had there way with every obstacle at the final spot, leaving the judges a tough decision to be made and $2500 to be distributed accordingly.

The final results were to not be announced until the after party, in fact they were not even decided until the after party! On the roof top of Casron’s high rise apartment the after party slowly culminated to a fire breathing spectacle as one of the non-Blader attendees showed off his high proof alcohol fire spitting skills. During this time, ATL’s elite debated as the final results were set in stone. The results were announce in front of ATL’s skyline and Sizemore was declared the winner and awarded his $1500. Unfortunately, the awards were interrupted by the police and the final cash awards were given away in the parking lot. The gang sectioned off at this point into the blur of the night. From then on, it was getting kicked out of the bar for “car beers”, passed out photo shoots, and sharpie neck swastika tattoos in the Waffle House. 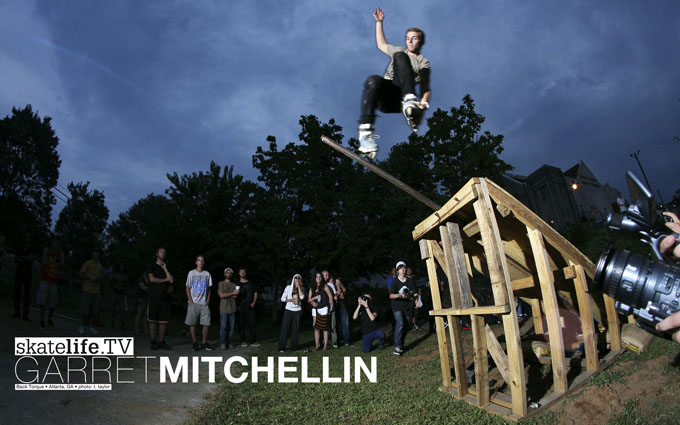 I awake early morning in Sizemore’s oyster chair and stumble over to the floor to sleep off a bit more of my hangover. I obeyed the rules: my wallet stayed in my back pocket, my unfinished beer and skates were in Trace’s trunk, and my wife…still in Florida. When everyone awoke we reminisced about the events of the prior evening, cracking up every other minute about all the necessary nonsense that night provided. It’s at this moment in a trip when you realize how awesome the Blader network is and how you don’t want the weekend to end. You come to terms that you can’t truly experience a city like you would without your Blader buds. It does not matter if you’ve known each other for years or not. There’s always the correlation that says, “I know you,” and you salivate for the next reason for us all to congregate again and celebrate our little slice of chaos.

INSIGHTS: The Humble Perfection of David Sizemore by Tom Hyser