It takes time and quality to create an entertaining piece of art and through natural selection I came across Zebastian Cassel. A 24 year old University student studying Cultural-Science and skatepark instructor living in Linköping, Sweden. Over sometime, I spied on him to observe his consistency as a Blader and just felt he was just the right athlete to feature. As usual I kicked off my letter to him with a “Good day.” and went into detail about featuring him on skatelife.TV. Dude was just so chill to work with, not only was he indeed consistent he was just pleasurably professional and by far one of the best experiences to date. Here are some words from Zebastian about this experience… 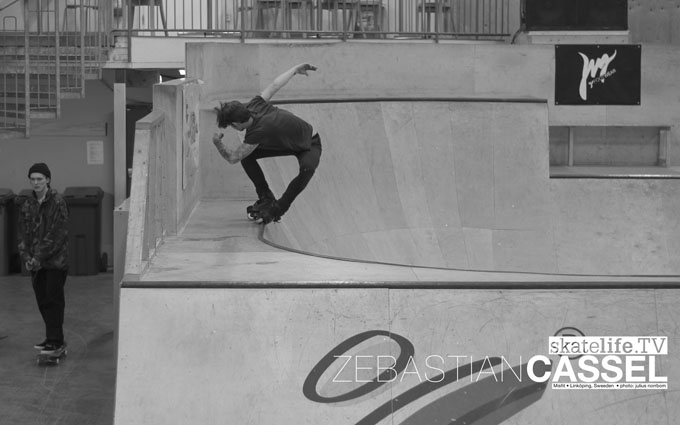 When I was contacted by Moronie about doing a feature on skatelife TV I was a bit surprised, I never really expected to being asked. Don’t get me wrong it’s great to get some media coverage and people taking an interest in your blading, but it’s also a lot of work if you want it to keep a certain standard quality-wise and first problem that came to my attention was the photos, I don’t know anything about taking good skating photos so that was a bit of a struggle. After about 30-40 camera-settings adjustments and sore heels of doom after doing the same gap 10-15 times my babe had got the hang of it and the photos were taken care of.

Second thing was this write-up and I started of writing a lot of pretentious bullshit about my vision for blading in the future and how it’s supposed to be in my opinion. Truth is though there is nothing new to say and even if there is there will always be those who express themselves by hating on others rather then putting out stuff themselves so there is just no other way in my opinion then to ignore the hate and focus on the good stuff and be thankful for things like Blader-owned companies, new cool mags, cool clothing brands with great new lines and the ever flowing new potential and interest in blading surrounding us. I love to blade and I really don’t think internet-hating is a part of rollerblading but hey that’s just me.

Getting clips is always pretty fun though, in my opinion it’s more the process of deciding what’s good enough or not and then keeping the level throughout the whole edit and trying to up your game by coming up with new lines and variations that’s hard. Choosing the right tune to go along is just a nightmare and it’s usually a process that takes me about 3-4 days when I just bomb my shuffle full of potential tunes and then listen trough them all and decides which ones suits the feeling I want to portray. Big thanks to Fredrik Andersson, Stephanie Midhammar and Christofer Kohn for holding the camera!