We’ve been blessed in Arizona to have legendary icons involved with our scene. Back in the day, it’s safe to say you would have given anything to just meet Dustin Latimer, let alone skate with him. For our local Arizona skaters, it was a common thing to see Dustin skate in person, and witness his “god like” ability first hand. It’s a special thing to have someone like DL shape BLADING the way he did, and be able to say you were a part of that era.

Dominic Sagona made the move to Arizona earlier this year, it’s crazy to have yet another icon like Dom be a part of our scene. Dominic is such a humble person, he’s always down to skate with anyone, no matter who you are. What’s cool is he takes the initiative to motivate other skaters too. He lives on the west side of the valley, and sets up skate sessions at his local park – “T-Bird” during the week. Watching Dom skate is unreal, only a select few people can manipulate BLADING the way they want to. Dom is one of those skaters.

More often than not, it’s human nature to start taking a good thing for granted. Sometimes you have to take a step back and realize what’s in front of you. The featured photo of Dom makes you do just that. You step back and realize how special it is to have a skater like Dominic Sagona involved with BLADING. We’re fortunate. 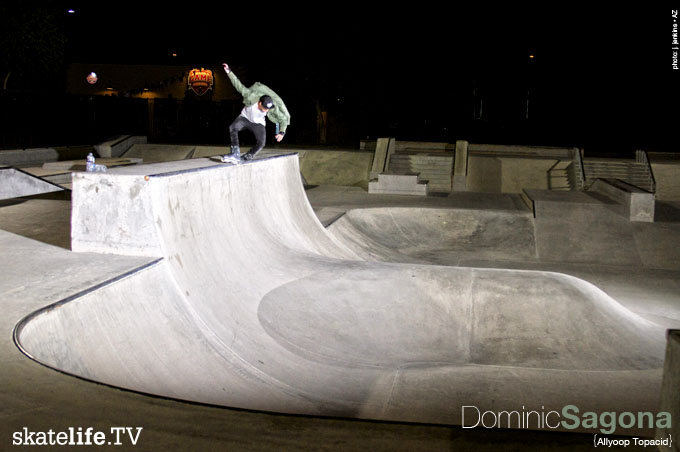 After a long stretch of injury Dominic was brought to Powerhouse to commence his rehabilitation. Swagger ensued.

Shot and Edited by Richie Eisler.