Our flight landed in JFK Airport and the attendant gets on the loud speaker and says “Welcome to Jamaica!” Haha, I thought that was pretty funny! Although, the next second reality hits and my heart starts to race a little bit because I knew that everything that I knew or thought I knew about the ‘Big City’ was about to come true.

My girlfriend Diane and I get off the plane and walk over to baggage claim only to receive the biggest “Welcome to NY” from my client John who is a former Blader himself with history stemming back to the late 90’s. Dude was literally had his phone in the air playing Tupac’s “California Love”! Best greeting to date! Ironically enough I met John simply through Instagram, yeah who would’ve thought that a couple of hashtags we had in common #blading and #tattoos could bring two total strangers from opposite coasts together.

John and his wife showed us around the city and immediately after stepping out of the car I was stuck looking up towards the sky gazing at giant buildings. Wow, the city is everything I imagined and more. Just walking around and feeling that muggy heat, seeing all of the yellow cabs, the smell of sooo many foods and of course a million people on the side walk was like no other and this was just the first day!

The next day John picked us up from our hotel in Queens and we rolled out for a taste of Gray’s Papaya. While eating outside on the street corner, a tour guide in a double decker caught eyes on my girl’s Magic Johnson Lakers jersey and gave her a thumbs down. We laughed and said, “yup L.A. is in the building!” Shortly after John dropped us off to Central Park, so I can scratch something off my bucket-list: cruise Central Park on blades with a girl…check!

The following day, I spent the whole day doing customized tattoos for John and his wife. We freestyled a full colored Japanese Geisha back shoulder piece. 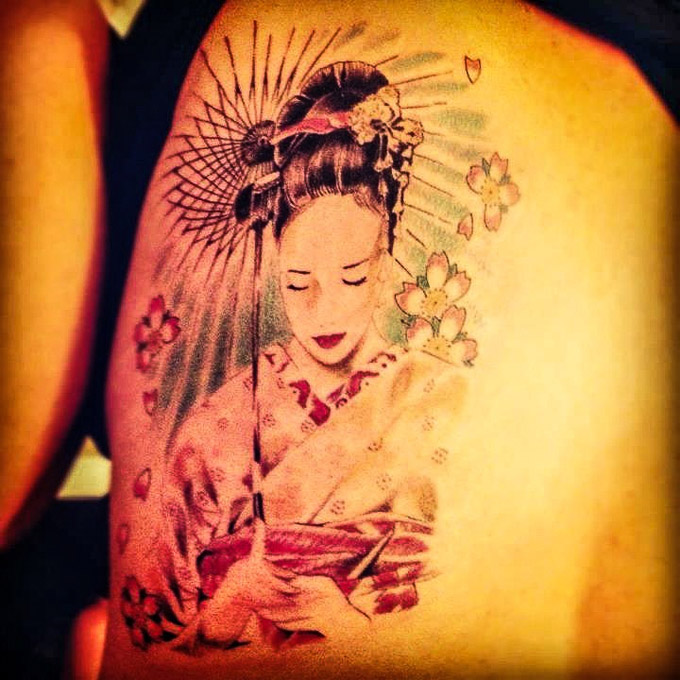 Took a quick break and were served with some really bomb ass Puerto Rican food before I started on Johns huuuuge Japanese Oni Mask back piece. I literally tattooed that day for about 7 ½ hours straight with the air conditioner on full blast! I returned to the hotel at about 2 am, where I’m surprised with a inbox from Moronie of Skatelife TV. She told me that she had seen the pics I’ve been posting and that I was in NYC and wanted to see if it would be possible to link up on the last day of the trip to get some clips and pics. Trust, as tired as I was, I knew I had to take the opportunity! We got the talking through text, set everything up and it was on.

Next morning, Diane and I got picked up by Moronie in perfect style, she pulled up in a pimped out black two door sports Benzo and helped me load our blades and my 30 lb. Jug bag full of my tattoo gear into the trunk. Moronie drove us over to meet and warm up with the photographer at the newly renovated Coleman Skatepark aka LES. Upon arrival into Chinatown we saw another Blader, we didn’t know him but he was walking with Valos in hand. So we invited him to come roll with us (by the way, great rolling with you Andrew Smolak!)

Didn’t take very long for me to scan the skatepark and fall in love with the scenery under the Manhattan Bridge and of course that gorgeous rainbow fun box! Then, Christian Delfino, one of skatelife.TV’s photographers arrived during the middle of my warm up, and after I got a few tricks down I knew I was ready. He got his photography gear out, I put my game face on and we went to work! Christian and Moronie cheered me on as I laid out that “Cali Steeze” and definitely got some cool shots out of it. 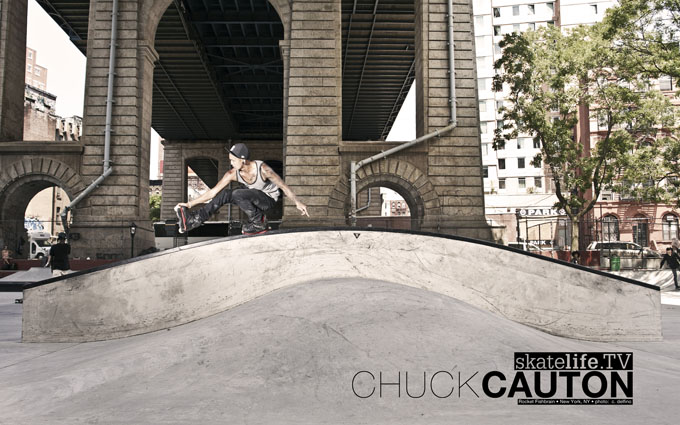 Moronie, Christian, Diane, Andrew and I packed up and got ready to hit up another spot. At this point, time was working against us because NYC rush hour traffic was steady and on it’s way so we decided not to venture out too far and stay within the area. We found a random set of ledges at a Chinatown city park, but…the ledge was so rough, I just ended up eating up my brand new soles. Ah well, the day was very productive so we all called it, caught some Vietnamese grub, had good convos and just chilled and vibed.

After a successful day of Blading and fine dining it was time to end our trip and head out to the airport. I was pretty bummed out but it was good to come out to the East Coast, meet such good people and most of all make new friends and connections. I’ll never forget the new memories made, my new friends, their generous hospitality, and will forever live knowing the “New York State of Mind”.